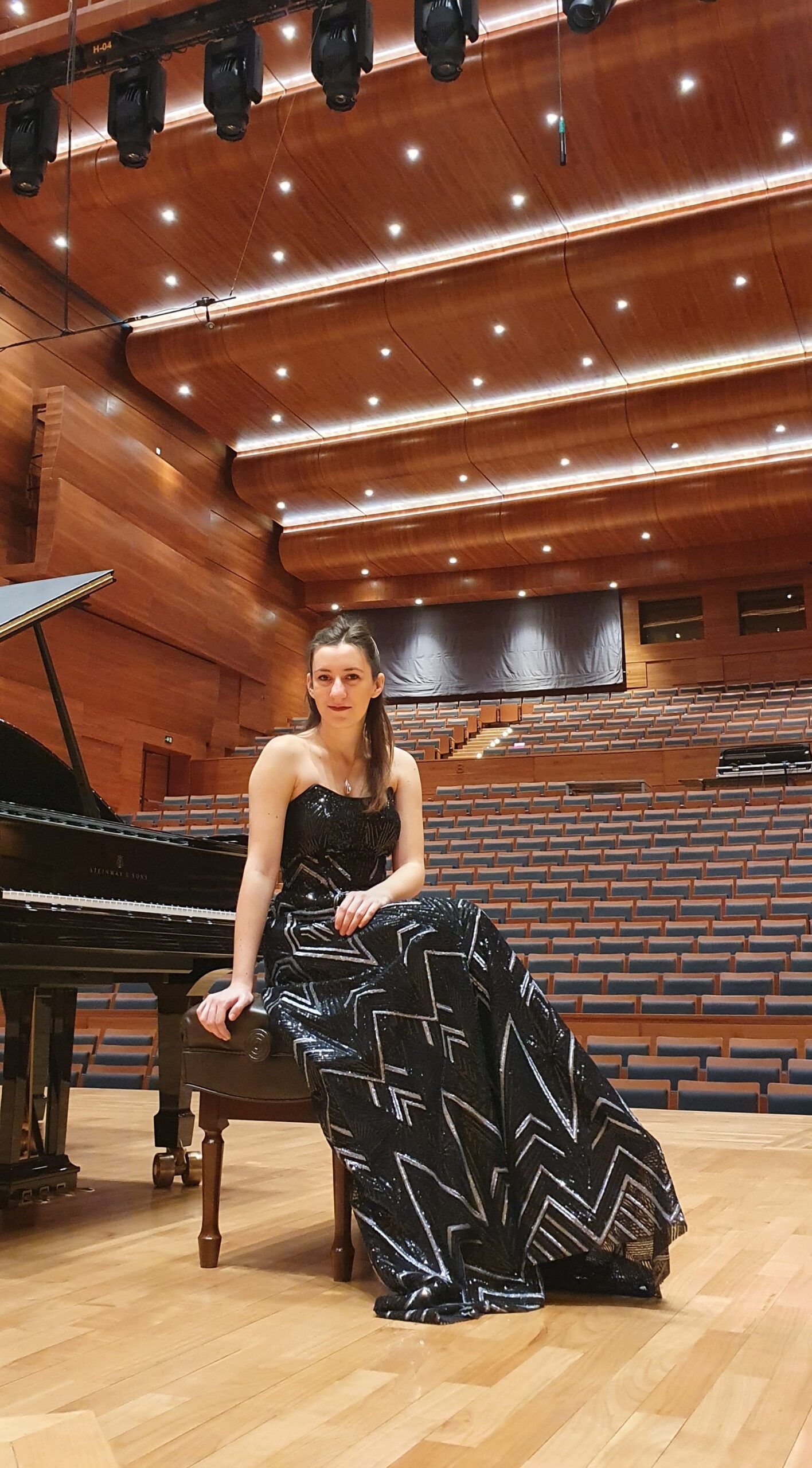 Mimoza Keka, PhD, is a classical concert pianist with interests in different fields: music performance, teaching, research, digital technologies, recording and musicology. Along with her numerous projects and concerts across the country and abroad, she earned acclaim as a recitalist, chamber musician, piano accompanist and recording artist.

Since studying at the Faculty of Music in Skopje with Prof. Todor Svetiev and Prof. Lilya Zilberstein, obtaining a Bachelor of Music (2015) and a Master of Music Arts (2017), as well as being awarded in 2021 with a PhD in Musical Arts, Mimoza has launched into a successful concert career as a solo artist, with concerto appearances, solo recitals and chamber concerts. Moreover, she became member of the Association of Music Artists (SMUM). In 2022 she published her book “The use of digital technologies in quantitative analysis of piano performance” available at Amazon.com as well as she published her first solo album named NON-FUNGIBLE, available on all streaming platforms.

Mimoza has collaborated with distinguished conductors including Sasha Nikolovski-Gjumar, under whose baton she performed the Piano concerto no. 2 from Camille Saint-Saens, conductor Sasho Tatarchevski, as well as conductor Bisera Chadlovska at the Faculty of Music in Skopje for the Opera Studio Subject (undergraduate and postgraduate studies). As a chamber musician, in 2017 she joined the Ensemble for contemporary music Contempora from SOKOM. Additionally, she has an active engagements playing piano duo with pianist Francesca Orlando.

Furthermore, she has enjoyed performing recitals in many European Cities including Paris, Rome, Prague, Bristol, Milan, Trieste, Siena, Punta Ala, Sovicille, Sozopol, as well as in the USA, where in June 2022, she performed a solo recital at Gallery MC, Manhattan, New York.
Mimoza has performed at Concerti del Tempietto, Les dimanches musicaux, International Festival Akordeon Art Plus, at the International Francophone Festival Soleil in Sozopol, Bulgaria, Siena Summer Festival, having performed in the renowned hall of Palazzo Chigi Saracini  in Siena, Italy (2015, 2016, 2017), Festival International de piano Jeunеs Talents in Montrond-les-Baines, France, as well as at the Spring Concert Season of Bristol Music Club in the United Kingdom.

Among her most important engagements in the country are her solo recitals at major music festivals including the New cultural wave from the Ministry of Culture of North Macedonia, Festival Zlatna Lira/Golden Lyre in Skopje, Festival Days of Macedonian Music in Skopje, Autumnal Musical Festivities in Skopje supported by the Ministry of Culture of North Macedonia, and Musica Viva from the Faculty of Music in Skopje.

Since 2015 she has gained experience at the State Music and Ballet Center in Skopje as a Piano Teacher, having passed the highest State Exam from the Ministry of Science and Education of North Macedonia and qualified as a Piano Teacher. From 2019 she is appointed as a collaborative pianist at the Faculty of Music in Skopje working with conductor Bisera Chadlovska.

Mimoza has also performed in a number of master classes with highly acclaimed pianists such as Alexei Volodin, Alexander Ghindin, as well as participating in professional trainings at prestigious music academies including Accademia Musicale Chigiana in Siena, Italy with world-renowned pianist, maestra Lilya Zilberstein from 2015 to 2017.